Europe at your doorstep – project E-handbook and summary 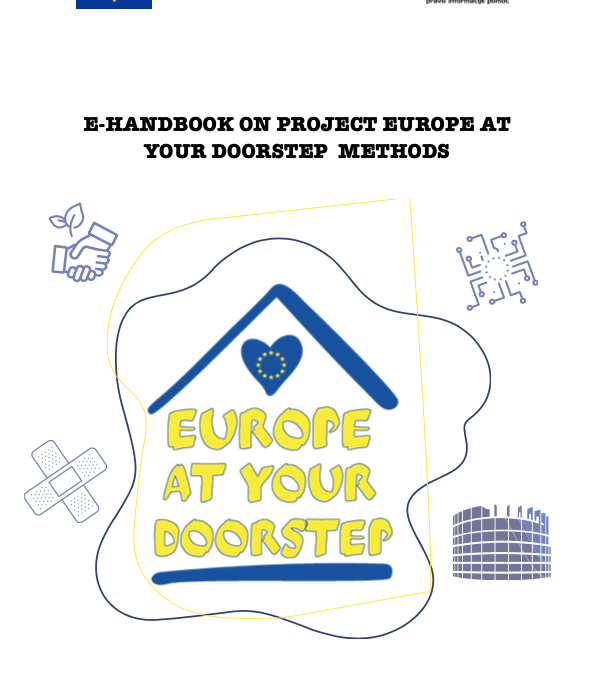 In 2021/2022, Zavod PIP executed the project Evropa na našem pragu/Europe at your doorstep, which had 3 essential goals:

The project Evropa na našem pragu/Europe at your doorstep focused on the informing of the citizens of the Podravje region about the role of the EU and the European Parliament, as well as the presentation of EU’s key policies that will immensely affect the everyday lives of the citizens and will be carried out on a local and regional level. An improved active participation of citizens in the shaping of our common future in the EU is crucial for a successful development of the Union. Eurobarometer researches indicate that people are not informed well enough and also not really acquainted with the operations and activities of the EU. The research data also show that the citizens are interested in becoming more involved in the decision-making processes.

The alienation of the citizens from political processes seems to be one of the main problems of the modern societies. Non-governmental organizations play an important role in addressing this issue, since they represent an important bond between institutions and the citizens, a bond that allows them to encourage the citizens to become actively involved in the democratic process and at the same time offer the supportive environment which actively enables their inclusion. Non-governmental organizations offer the citizens an alternative channel – beside political parties and lobbies – to voice their different opinions and ensure the diversity of interests in the decision-making processes.

The decision-makers in the EU are aware of the fact of how important it is to include the citizens in the democratic process, specifically in the planning of policies, reforms and development programs.

EU is therefore adamant in supporting various funds, programs and projects that contribute to a better inclusion of citizens and organizations in the shaping of legislation and policies intended to face social and economic challenges on a regional, national and the level of the EU.

Why do we need such projects?

Being well-informed is crucial for active participation of citizens in the political process on a local, regional, national and on the level of the EU. Only then can a democratic, inclusive and successful society be built, with quality public service and innovative economy. The role of the citizens in a political process always works both ways and covers the influence of the citizens in the shaping of policies as well as the effect of adopted policies on the citizens. Practical examples however indicate that despite all the instruments and leverage at disposal, numerous political decisions, many programs and laws are still adopted without the proper understanding of the needs and interests of those for whom they are intended, meaning that the citizens are left out of the actual process of planning and adopting of regulations.

For sustainable product of the project we developed an  E-HANDBOOK